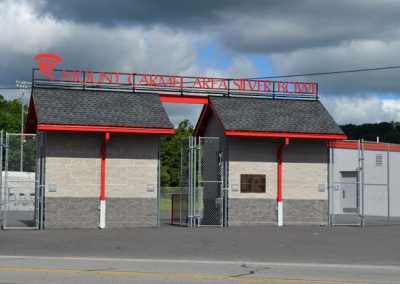 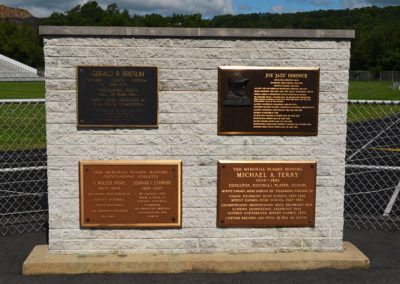 Plaques honor former coaches and players near the main entrance 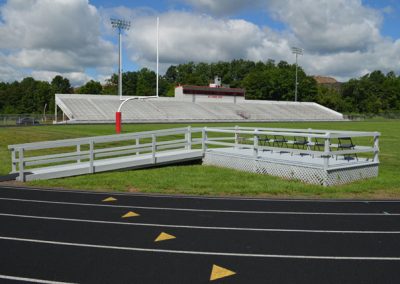 The handicap seating area is near the main entrance. 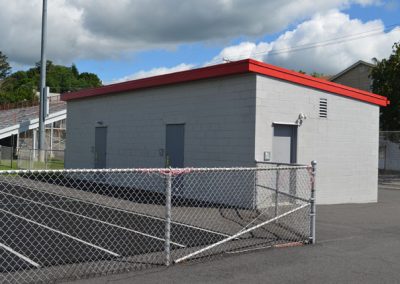 Located near the main gate. 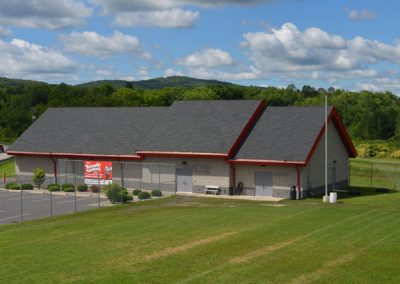 Facility for both home and away teams 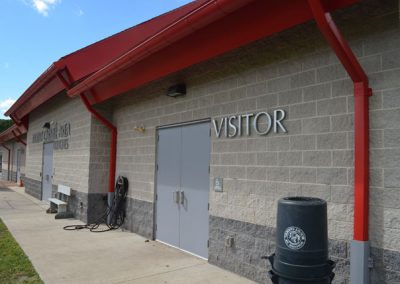 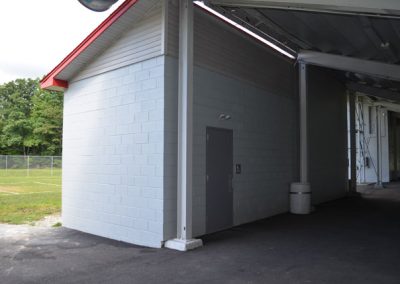 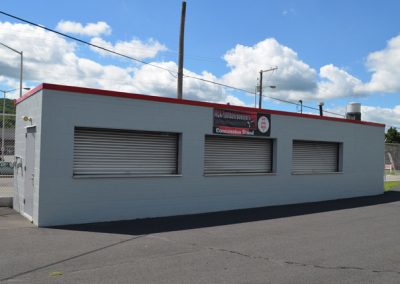 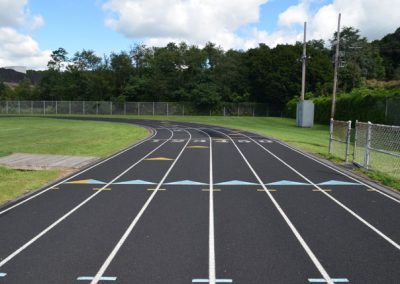 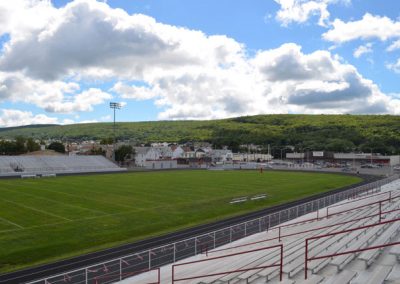 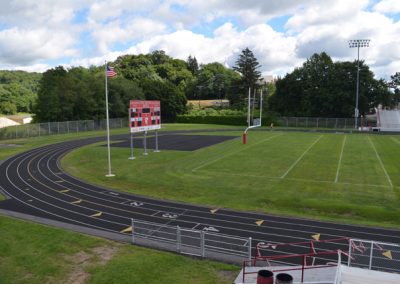 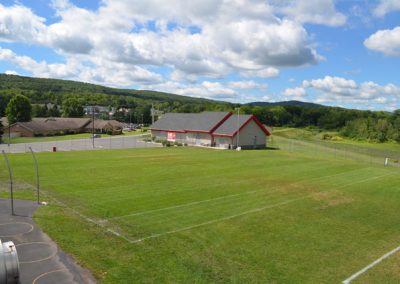 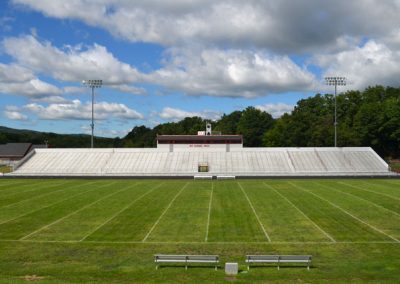 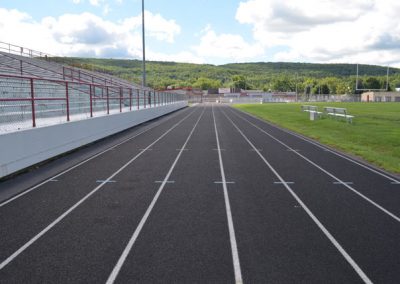 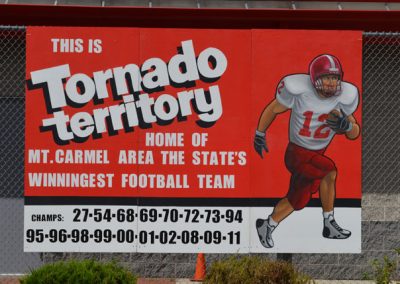 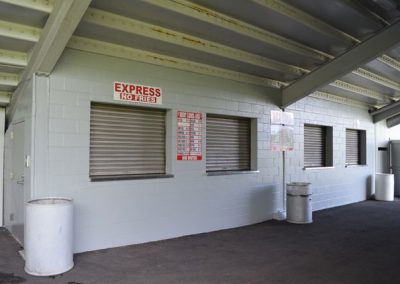 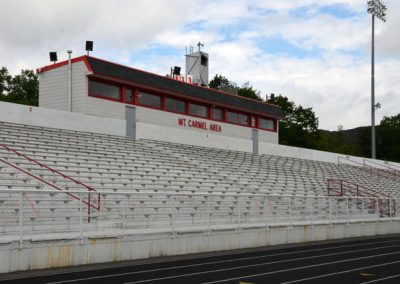 The fact that it was built was a monument to dedication as the process began almost 10 years prior as a move to build a real athletic field. They didn’t only talk about it but they laid plans starting with the selection of the sight. What they chose was a swamp – a neighbor of Old Lake De Stink, which was for many years one of the areas few eyesores. Negotiations were held to acquire the field, followed by a campaign to gather the funds necessary to level the property. All of the progress whetted the wishes and wants of the sponsors, leading them to gather more funds to build a fence, bleachers and a fine playing field. The money began to roll in and the momentum of the community enterprise greatly increased. Total cost of the initial endeavor was $24,413.

The original planners chose an 8 foot fence, built with western fir, one of the most durable woods known at the time. A wire fence would have cost considerably more. The directors also chose the wood as it would give employment to Mount Carmel men and would also permit the sale of advertising space.

The original stands, which seated 6,600, where constructed of wood. The 80 feet high steel light towers were erected for the opening game of the 1932 season. The lighting system was installed by a team of technicians from General Electric’s headquarters in Schenectady, New York. The team was so impressed with the facilities they boosted it was the most beautiful high school sports complex in existence and it would be the best lit high school stadium anywhere, actually only rivaled by Temple University stadium in Philadelphia.

The dedication was held on October 7, 1932 prior to the first game at the facility with William Penn of Harrisburg. Penn won the contest by a 13-0 score.

In the mid-1930’s, stands were constructed in both end zones and painted silver. The new bleachers gave the stadium a bowl-like appearance. Thus, a sports scribe called the stadium the “Silver Bowl,” the name which is still used today. At this time, the stadium could accommodate 10,000 fans.

One of the largest events of the time was when 10,000 people attended the stadium to do honor to the name of Jesus in September of 1937. The event was sponsored by the Holy Name Societies of churches in Northumberland, Montour and Columbia counties, at the call of the most Reverend George L. Leach, Bishop of Harrisburg

On October 29, 1938 John L. Lewis, President of the International Mine Workers Union spoke at “Michell Day” to members of the local mine workers from three local counties

In June of 1940, the wooden stands on the visitor’s side (west) were replaced with all steel grandstands, increasing the capacity to over 10,000. Also at this time, the home side was switched from the east side stands to the west side stands.

Also, Mount Carmel purchased a new public address system form RCA and was first used in a game with Minersville in 1940. Bill Hodrick, a member of the high school faculty, was at the mike to give a play-by-play of the action as well as other announcements.

In 1946 the end zone stands were removed and replaced with a permanent set of bleachers in the south end zone accommodating 1500 additional spectators. This brought the actual seating capacity to 7695 (3,564 – west – 2,631 – east – 1500 end zone). The new home side press box was completed in 1972 and in 1977 the east visitor’s stands were replaced with the current steel grandstands. Also completed at the time was work on the light standards, construction of new concession stands, a visiting team locker room, concrete sidewalks and painting of the fence. This project cost in excess of $500,000.  And gave the stadium a seating capacity of 7,202.

It was in 1946 that the largest celebration of its kind was held following World War II and had the Silver Bowl at its center. The “Victory Celebration” was held from August 11 to August 14 and featured a Memorial Service, and Ball, a Variety Show with 10 different acts, and culminated with a fireworks display. Mount Carmel was fortunate enough to have its own General Jim Gavin present following the parade,

The original cinder track was extensively improved in the summer of 1984, as it was replaced with a polyurethane surface (all-weather track) at a cost of $150,000.The original field house, built in 1969, was replaced in 2012, as was the main entrance,  and the track was resurfaced in 2013.  In the next year the field was officially renamed ‘The Joseph ‘Jazz’ Diminick Field in honor of Mount Carmel’s legendary former football coach.  Later in the same year the track was rededicated to Mr. Gerald Breslin, former MCA Track Coach who compiled a record of 29 years without a dual-meet loss.

Professional Football Players who have played in the Silver Bowl

Others who have been at the stadium

Other events that have taken place at the Silver Bowl

Boxing – There are records of boxing having taken place from 1938 to at least 1952.Some of the notables were Joe Baksi, J. Champagne, Ralph “Kid” Gonzalez, Art Henri, Bob Peck, Johnny Lombardo, Bruce Ubaldo, Frank Sodano, Johnny Saxton, and of course Matt Raymond and Gus Dorazio

Baseball – : Local teams played in the 30’s into the late 40’s. The City baseball league had teams such as the Camp towners and General Mine compete at the stadium

Rodeo– A stage rodeo was part of a Columbus Day program in 1937 and was given by the 103rd Cavalry of Sunbury. Daylight fireworks were featured as well as a bomb that released a parachute supporting a horse and rider. The program included a drill, a tug of war, potato race, Roman riding including hurdling by various members of the troop. The main feature was a demonstration by George Johnson, a ten year old stunt rider who was enjoyed by all. A pistol exhibition, a manikin race, and mounted wrestling and a sham battle by the entire troop ended the 2 hour program.

Graduations – The first outdoor graduation occurred with the Class of 1969 with its 254 members and continued for a few years into the 70’s. The Class of 2021 once again held their graduation at the Silver Bowl.

Festival of Stars – Paul Semicek, band director at Mount Carmel Area, held a Festival of Stars starting in 1963 and lasting until 1976 where he brought in famous drum and bugle corps from Eastern United States and Canada. It continued for a number of years following Paul’s departure. Groups include the Hawthorne Caballeros, who were world champions at the time, The Reading Buccaneers, Yankee Rebels Crusaders of Rochester New York, and the Westshoremen of Harrisburg. The Matadors of Providence Rhode Island were a later featured group.  Also performing was the original Glenn Miller Orchestra, Doc Severinson and Tommie Newsome from the Tonight Show, Gene Krupa and Maynard Ferguson.  1963 Miss America Jacqelyn Mayer was also part of the first Festival in 1963and delighted local band member by showing her skills on the clarinet.

Semi Pro Football – The Anthracite Maroons and the Harrisburg Colored Giants – officially The Trojans – was played on September 15, 1946 – A freshman game between Temple University and the Naval Academy plebes was played in 1971 with MCA’s Henry Hynoski playing for Temple It was arranged by Temple’s Coach Wayne Hardin who had previously coached at the Naval Academy and then went back in the 80’s